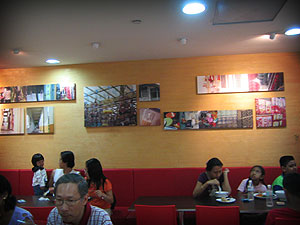 Went to Tiong Bahru with Jon and Anne, Kelvin and Laurain on monday which was Hari Raya. Of cause all our kids came along. It was a real big somewhat “family outing” kinda thingy. haha… The original plan was to go to Ikea, but after seeing about 40 cars waiting to get into the carpark, we reckon the crowd in there would be crazy, so change of plans and to Tiong Bahru Plaza we went.

The picture above is taken at the food court. Very nice concept. Its photos of the old Tiong Bahru. Very nice, very lomo feel to it.