Got some pictures to share from this year’s IDN DesignEdge conference. I think many would agree that last year’s IDN MFC 04 was maybe not so… confrontational… those who were there on day 2 would know what i mean.

I will not cover everything that i saw, cuz there is just too much, but i’ll share what i personally liked of the conference. If you wanna know more about the presenters, etc. do check out the DesignEdge webby.

Was really excited for this conference and when i finally arrived, i have to say the setup was nice, with multiple hanging screens and beanbags in the front for people to slouch. I did not take much pictures on the first day, so here are some pictures from the 2nd and 3rd day. The main segment that i was looking forward to was the “DesignSingapore Internation Panel” and just by the looks of the panel members and their credentials, it was definately a power packed session.

This is Toyo Ito, the designer for Singapore’s new Vivocity at HarbourFront. I’m looking forward to see the mall when its completed. I think i’ll love it + all the reno going on in Sentosa, i think the other end of the NEL (North East Line) is going to be a real hangout in the future.

There was a discussion session when some of the members on the panel had to ask others a question. Here is Ogilvy & Mather’s Steve Hayden (who wrote Apple’s award winning ad back in 1984) asking Toyo Ito a question. 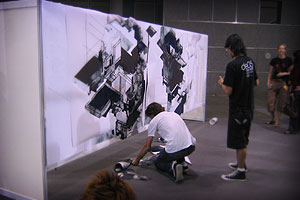 Delta’s work is quite inspirational. The way he talked about the process being sometimes more important than the final outcome was really good, i think alot of us need to be reminded of that. I particularly liked the concept of “Urban Mould” which he shared.

The longest queue had to be Faile’s booth, they were busy silk screening away.

Here is a Joshepine sharing about her label Hansel. She is a friend of my cousin, i knew her back in the days when they were all in Lasalle. 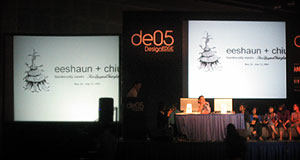 I was suprised to see eeshawn, cuz it was just a night before i looked thru the collab he did with Sex, Lies & Fairytales. Also, he did a fantastic doodle for Rojak 2. 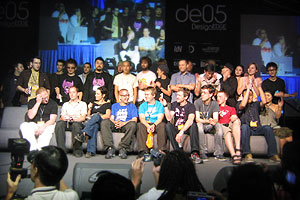 Here are all the presenters who were present at the end of the conference. It was a good ending, although there were some bits where it was abit tense when the audience complained about the conference being a show and tell of sorts. But just to add, i think everyone really enjoyed Rostarr’s segment on day 2 and the resfest sneak preview on the day 3. But in general i think it was an okay conference and the best wisdom i took away from the conference was from Richard Seymour where he said poets, artists, dreamers all dream of the future, but designer make the future.