It’s DONE! I’ve managed to run at least 5km everyday for 30 days. Half way thru I really struggled and at run 13 I’ve already mentally decided to take a break, but with friends around me motivating me, I managed to pull thru all the way.

Many people over the past 30 days have asked me “Nick what are you running for? Lose weight? Some purpose?” actually there is no purpose or any big grand reason. I even had an idea of stopping at 29 just to mess with people and to show I can overcome my OCD. lol.

Ok, the real reason. (maybe post rationalised) A colleague of mine shared with me a video from India. Nike’s “Da Da Ding” and it was really catchy.

The feel was great and I missed that feeling. I’ve been eating loads of beef, drinking loads of wine and i’ve not run for months. That video reminded me of another video which my other friend shared a few years back and the feel was there as well. That runner’s high.

So I decided in the spur of that moment while seeing those videos. I’m gonna run 5km for 30 days straight. And just to make sure I keep to it, I made it public on my Facebook feed.

Lots of friends gave ideas and it started to feel like I have a support group.

“Ok I’m doing It” was the mental note that started on day zero.

Day one started on a Thursday. It was fine. I’m used to 3 – 5km runs without much training, so quite motivated.

Day three, my daughter Clié wanted to join me. So she walked, while I ran in one direction. I then told her when to turn back so we would end roughly at the same time knowing her speed.

Day four. Sunday. Pearl wanted to go out and sweat it out with me too. So it was a nice outdoor type couple activity. She brisk walked while I ran. Same deal with my daughter, she turned back when I hit my 2.5km mark.

Day five. Decided to push myself a bit more and did 6km. Nice. I was getting the hang of it. But it being a Monday, its still kind of a challenge.

Day six. I was super into it. BAM! I’m confident I can stick with it till the end for this 30 days thing.

Day seven, Pearl came along again. She walked and I ran. This is starting to become a nice and healthy habit.

Day eight. I wanted to push myself a bit more and managed to get my speed to under 6m/km.

Day nine tough. My body started to feel the strain. I was limping slowly in the office, but it was Friday, so still having the #TGIF mood. I really wanted to see Star Trek Beyond and have already agreed with friends, so went to Vivo to have dinner first. We had pork knuckles, beer, then went to see the movie. By the time the movie ended it was already 11pm or so. The plan in my head was that I will sober up during the movie, so the beer is not an issue, but on the way home, it was raining… oh mai gawd…

My neighbours have asked my wife and I to join them at their place for beef and wine and when I got home I got changed to my running gear. Wore my running top which had a hoodie and put my phone in a zip lock bag. I set off just after midnight and thank God it was only drizzling by then. Came back wet, but I did it!

Day ten. My friend Andy was following my progress and decided to join me after his National Day Parade Preview with his family. We met at 10pm at Waterway Point in Punggol and ran one round. for about 5km, then he ran home for another 2km, while I did the same. But he ran from Sengkang to meet me and have already started with 2km, so that day he did 9km, while I did 7km.

It was nice to have company.

Day eleven. I finally decided to get Spotify Premium and with the Singtel bundle, data was free, so it was awesome. There was a running playlist and it orientated itself to your pace (mine was 175 beats per minute) and you could select genre too. So pop songs galore. It felt like my daughter was the DJ of my run.

However, the run was still tough. It was getting really tough as my thighs are really aching.

Day twelve. Monday. I went to office utterly exhausted. I think my body did not have the time to recover, so it’s starting to really be physically taxing. Anyway, done. Glad Monday was over.

Day thirteen. I think I really need a rest and badly want a massage. I was basically limping in the office. So I shared with my friends my dilemma. 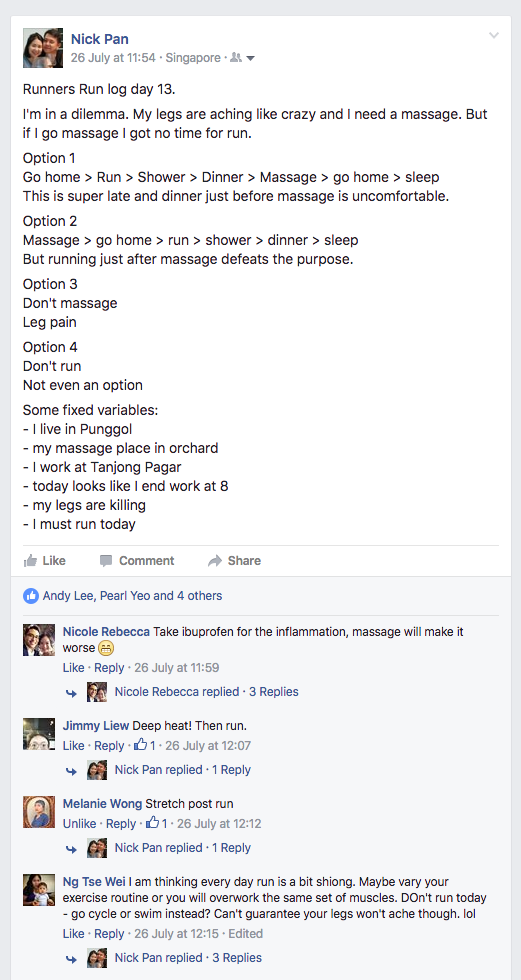 Mentally I was ready to take a break for the day. Looking at concerned friends I think I should heed their advice.

So during the day, I had to join a meeting and the meeting included a very senior management person and he too was following my runs and casually asked me how it was going. I told him “I’m heeding my friends advice and will be taking a break today.”, I got an immediate “F#*k you!”. LOLZ. Too funny. He then continued to show me his Nike+ app which showed FIVE FREAKING THOUSAND KILOMETERS! It was over 800+ runs! I was literally shocked. I was embarrassed to even look at my own Nike+ app now.

So you won’t believe what happens next…

Day fourteen. Gotta slow down and get back to normal speeds of 6m/km.

Day fifteen. There is a company event and there will be drinking at night, so woke up at 5:30am and did my first morning run.

Day sixteen. Since the previous day’s run was in the morning and I had enough time to recover and being a Friday, so I decided to do a 10km with my new Plantronics BackBeat Fit headphones today. Thanks to Isaiah for his recommendation.

Day seventeen. Going to dinner at my friends place in Sengkang. measured it to be 7km run, so decided to run there. Instead did 8km, but at a good pace of 5:40m/km. Then it was beef and wine the whole night thru.

Day eighteen. I did a slower run, but It was nice to have Pearl joining me to go outdoors. She walked and I ran ahead.

Day twenty. Done. But a tough one. Basically a defensive run and trying not to break the body. Mentally thinking its just 10 more to go, I was really stoked.

Day twenty two. I started listening to my body and this is what It said.

I went home and setup a Facebook event. “30/30 Nick’s Last Leg” and invited all my running friends and the public. lol. Why not right. It would be fun if people showed up.

Day twenty four. Friday, start of the National Day Long weekend (but unfortunately due to work, I cancelled my Monday leave), but the good vibes was still there. Did my 5km and had beef and wine for at my friends place. I got introduced to Kamadoe Joe and BBQ have changed forever.

Day twenty five. Sunday. Wife encouraged me to take it slow and walk with her. We did 6km and at this time, my Nike+ app average pace which I’ve tried very hard to work on have kissed me good bye.

Day twenty seven. National Day! Got up at 6:30am and walked to Coney Island with Pearl. We did 7km that day. Nice. It was the first time both of us going there together.

Day twenty eight. Tough day at work, but I was focus to get my run done still. Done.

Day thirty. I got to Waterway point with my family. The kids wanted to inline skate with me, but I told them I won’t be able to take care of them, so they decided to just skate around that area. My wife also wanted to walk 4km, but sacrificed and took care of the kids. <3

Two of my friends Gary and Serena was cycling that night too and came to cheer for me at the end point. Project done! It was Done! 30 days of 5km runs.
I really want to thank all of my friends who have cheered me on while I was running. Every cheer in the Nike+ app meant something. It was a real morale booster.

A big thanks to all the friends that encouraged me in person, in comments on my Instagram and Facebook posts without you, it would not have been as fun as it was.

If anyone wants to do a 5km for 30 days, let me know. Maybe we start on the same day together? I’m ready when you are.