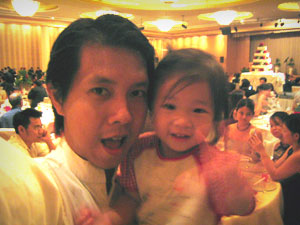 It was Joe and Kelen’s wedding at the Ritz Carlton. Wow… very nice wedding.

The very special part of the whole banquet was that at your seat, you had your picture there so that you know thats your seat. They have for few months already went around to take pictures of all the people who they have invited. Wow… massive effort.

Clié loved the place very much too. There were big empty spaces to run around.

But coming to the end of the banquet i was really really really pissed with a few kids. They made Clié chase them, but they were so much faster then her and no matter how fast she ran, she could not catch up with them even after falling over several times while trying to run faster then she can. They then laughed at her, taunt her, keep pointing their fingers at her with the “ha ha ha, you can’t catch us! ha ha ha…”. As her father, i could not stand it, it was not fair, how could she ever catch them!