It was a normal night, just like any other night in Punggol. The kids were playing, running around in our empty hall.

I finished my dinner and was zoning out on my sofa as it had been long work hours for the past few weeks and it was 10+ already. I heard a small crackling sound coming from the ground and felt the floor tiles moving. Maybe it’s just my imagination, maybe I’m just tired. Something felt wrong, instincts kicked in and I grabbed both my daughters as the floor tiles visually broke free and lifted off from the cement ground in a few seconds. 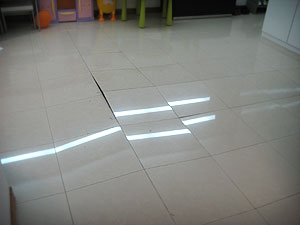 It sounded as if the floor was caving in. Thoughts of terrorism and 9/11 came to my mind for a split second. I started worrying for my neighbors below who might be having a huge hole in their ceiling. Will the floor give way? Will someone die? Is the building going down? It was really scary.

We told Clié before not to wear her plastic heels and create all those noise by running around in the house. We even told her that one day the floor will be spoilt because of that. That day arrived and she felt real bad. She started crying, she felt she spoilt the floor and the process was pretty scary especially when her father grabbed her and run to a corner of the house as if its a matter of life and death. 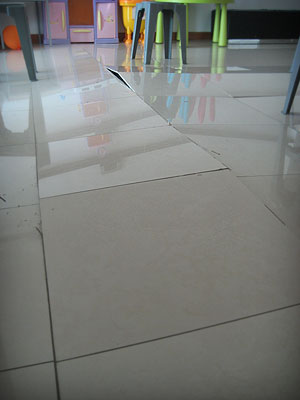 Reality set in and we knew what happened. This tile poping issue is very common in my area, there were already many people who had to have their tiles changed because of this. By reading this response by a Senior Executive Management Services Officer of HDB, its clear what was heppening.

We are aware that there have been a number of complaints by our lessees concerning tiling works at this precinct. Random checks carried out by HDB at the time of completion showed that the tiling works were of acceptable quality. The common cause of the dislodged floor tiles was the loss of adhesion of the tiles to the screed over time. Differential thermal expansion/contraction of tiles and natural deterioration of the bond between tiles and floor commonly contribute to such loss of adhesion. Unfortunately, such defects are usually not detectable at the time of completion of the flats. The building contractor is rectifying the affected tiles for the lessees at no cost to the lessees and HDB.

We called HDB, but they were already closed, so i looked up the net and found EM Services 24/7 number. Made my case and this morning people from HDB came to address the problem. 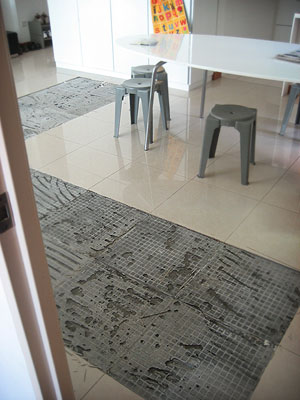 They had to take out the loose tiles, placed cardboard over the affected areas and will start work on monday. Next week we have to stay elsewhere. Looks like its gonna be my mom’s place. Time to pack, time to shift the whole family for a week. 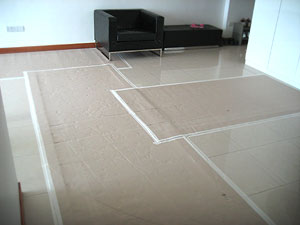 Thank God nursery school just ended & my daughter’s school bus will not be coming. So there is no need to worry now how she will be going to school. School is closed.

14 Replies to “Pop goes the tiles”