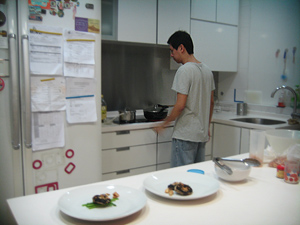 I’ve not cooked in a long time and have been hoping to go back into the kitchen. So today, i finally manage to make something. I woke up telling my wife that i’ll make Salmon with Portobello mushrooms for dinner.

After Cleo’s afternoon class, we headed to the super market and bought the necessary ingredients. Pearl asked me what i needed to buy and as a very experienced cook that i am, on my mind i only knew i needed to buy some Salmon and Portobello mushrooms. :) Clearly from here on, you know exactly how excellently professional i am in the kitchen. With much direct hints from my beloved wife, i managed to get alot more that just the key ingredients as i clearly did not do an inventory check of what we already have at home. All is well, we paid, we were on our way home to prove what a good cook i am.

I did see on TV how difficult it is to fry fish especially to still have the skin intact while ensuring it does not stick to the pan. Now this is the only thing that was still in theory in my head. By right if its deep fried enough, it should not stick to the pan right? Also i remembered going to a Sushi joint where they ran out of Salmon Skin which apparently was a key ingredient in a high end sushi, so i clearly did not want my salmon skin to be destroyed. Washed some asparagus and let them soak for a bit. Chopped lots of garlic and started frying them on hot olive oil. Ahhhh…. the BEST smell in the world, better than any perfume. Sprinkled some chopped garlic on the Portobellos and popped it into the oven to bake for the number of minutes my wife said which i clearly cannot remember right now.

Pearl washed the rice and set it for cooking. The cool thing is she use a normal pot and not a rice cooker.

Boiled the asparagus with some salt, then when it was done, Pearl poured away the hot water and put ice on it. I went like HUH?? Apparently according to her it brings out the rich green colour. ITS TRUE! Its called “Shocking” the vegetable to “Seal” the colours see Blanching and Shocking Vegetables. OMG! my wife is such a pro. 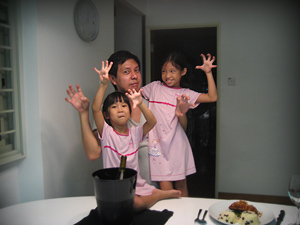 Its time for the main ingredient. I reused the oil that i used to fry the garlic as i think the oil should have turned into an amazing garlic aroma-ed magic oil. The salmon was towel dried, then slowly laid down with the skin side down. The concept in my head was to make the skin deep fried so that it does not stick to the pan and YES! it worked! When it was fried enough, slowly i lifted the fish like a price tag loosely stuck on a plastic wrapper. Slowly but surely the skin peeled off the pan onto nickpan’s hand, i think i’m the man, the pan man. fLiPpEd it and wahlah, its now on its way to cook the other side. 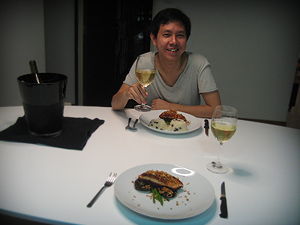 Plates are now out and asparagus laid out neatly. The portobellos takes its place rested on top of the shrooms and more garlic are sprinkled everywhere.

By this time, the rice was done and butter was added together with raisins which later was all mixed together.

When the salmons were done, they were slowly lifted out and laid across the greens. It looks great. Sprinkle even more garlic.

Its time to serve. Its time to take pictures like a good Singaporean.

The kids had theirs, we had ours.

One Reply to “Salmon Portobello”