Taiwan. The last time i’ve been to Taiwan was during my Army days and Taipei was once place i do have some memory and pictures of. I vaguely remembered walking along gray streets, friendly people and Taipei main station, other then that, i really can’t recall anything. That was some good 12 years ago.

This time, this Taiwan trip is with my dear wife and in someway its like a honeymoon of sorts. We left the kids back home with my Parents. I planned the whole trip using Tripit. You can see our plans on Tripit which then allowed me to download the itinerary on my iPhone.

Reached airport super early. We were already checked-in and walking towards our gates at 6 plus in the morning. Got up to our Singapore Airline flight and checked what movie to see on Kris World. lol. I managed to catch Angels and Demons and half of Terminator Salvation as the plane landed, on the way back i saw the second half of Terminator Salvation and Death Note and half of Death Note 2. When we landed, we had to figure out how to get to the city. At first i was wondering if there are trains from the Airport to the City, but apparently there isn’t and the normal way is to take a bus. We bought return tickets from airport to our hotel which is kinda cool and hassle free. The bus took roughly 1 hour and reached our hotel. Our hotel is kinda amazing. Its used to be called “One Star Hotel”, but the fact is i think they are more like 3 star. lol… Now they have changed their name to “See You Hotel”, but their signage and even website address still reflects “One Star”. yah… kinda confusing and yet funny. We dropped off our stuff in the room and headed to Xi Men Ding which was not too far away.

I loved observing another culture. The way people on the streets behaved, the school kids, the dressing, the hair styles, the mannerisms, etc… I was basically soaking up the Taiwanese culture. The whole “Huan Ying Guang Ling” (welcome in mandarin) was really like everywhere and they even have a certain tune to it. There were definitely some highlights on our trip. We had nice food, shopped alot, took all the public transport (ie. Bus, Taxi, Subway and Train) and shopped alot more. Strangely, but in some cool way, both of us did not like the night markets that much and felt they were kinda overated. Its just like a big pasar malams, i mean there is really nothing special.

Ok, i’m lazy to write out step by step, account by account of our whole trip, so i’ll just write out random highlights from the trip from here on. 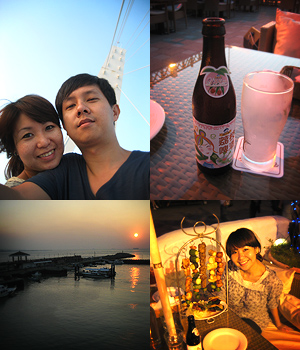 We went to Taipei 101 and it was really nice. The view from the top was amazing and we could literally see the whole of Taipei city.

We also went to Bei Tou for Hot Spring which was kinda nice, but somehow it was not as fantastic as we hoped.

The best part of the trip for us was going up to Fisherman’s Wharf at Tam Shui. The sun set was gentle and romantic, we did silly stuff and took quite a number of photos while waiting for the sun to set. We then headed to a restaurant that was playing nice bossa nova music. We sat on the outdoor sofa chair and watched people walk by. Pearl ordered a large fruit drink, while I ordered a Taiwanese Lychee Beer which was delicious. We ate light stuff on skewers. It was just wonderful. The weather was also wonderful. 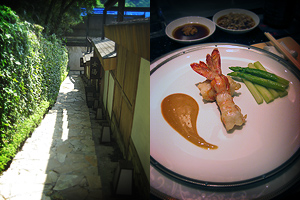 I’m just too lazy to blog about the while trip in detail, so hope the photos will be able to tell the rest of the story.