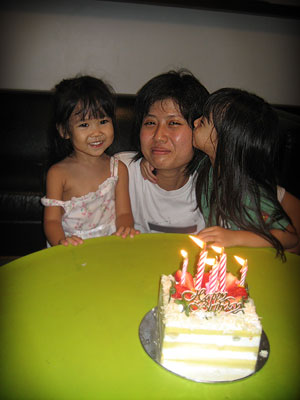 Silver to most is a precious metal, but to my family, Silver was a precious part of our family for the past 2 years. She will be dearly missed.

She came to our family in late 2005 and she is our third domestic helper… the best we’ve had by far and the best i’ve seen.

As her 2 years contract with us ends end 2007, we wanted to extend her for another 2 years. She hesitated at first as she have an Aunt who is unwell back home that she need to take care of. Silver and her Aunt are pretty close as both Silver’s parents have passed away already and i believe family is dear to her. However, after some consideration she agreed to extend her contract with us for another 2 years.

As she have been in Singapore for 2 years already without going home, we were keen for her to take 2 weeks leave to go home and visit her family. We also got her a few gifts to bring back to her relatives as she did express to us that she would like to bring back a kettle, sandwich maker, etc… We also passed her a few family photos so that she could show people back home who she was living with and the kids she took care of for the past 2 years.

2 weeks went quickly with Pearl running the house and we all anticipated for Silver’s return. She came back chirpy and with alot of gifts, with the most amazing one being our family photo printed on porcelain of sorts and it was well framed up with a distinctive Myanmar flavor. She even got real pearl necklaces for both my daughters. She did not have to, but she did.

On the 6th day of her return which was a saturday, she received a call from home and found out that her Aunt’s condition was critical. Apparently she had a fall and the bump on her head ended her up in the hospital and she had to have tubes running all over her. Silver’s Aunt wanted to see her… Silver had to go back… She had to go back immediately…

The earliest flight we could get for her was on the following Monday and she agreed immediately. However we had to get her a one way ticket as she was unsure if she would return. Everything happened so fast, we did not knew what to do, our much trusted helper at home was leaving… any may by leaving for good…

We were both stressed out as her return would have been disruptive to our daily lives as both of us are working and we relied on her to take care of our kids when we’re at work. But after much thought, we worked with what was certain. She had to go back and for good reasons, she is filial and we wanted to give her all our support. So come Monday, i brought her to the airport, she told us she would let us know if she would return or not after assessing the situation back home personally. She wanted to come back if she could, in our minds we hoped very much that she will return, but we had to plan as if she was not returning.

She emailed us the next day… she apologized and informed us her Aunt’s situation is quite serious, hence she had to to be around to take care of her.

We were all saddened and at the same time happy to have had such a wonderful helper for the past 2 years.

Thank you Silver Say Rah Bright, may you have a good life and may the lord’s favour be upon you always.

One Reply to “Silver Bright”